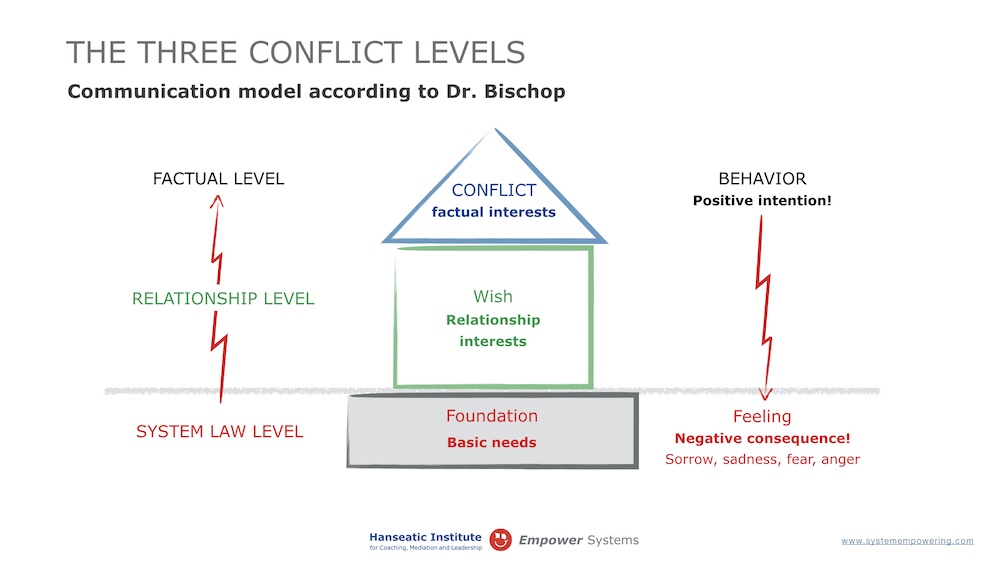 I have added a third level to the two communication levels, the factual and the relational level (cf. Watzlawik: Kommunikationstheorie): the system law level (communication model Bischop).

It is the foundation of the communication model Bischop. This level decides whether the relationship and factual levels function and can be stable. Similar to a house, which needs a solid foundation to be able to place the floors on.

At the same time, it is very helpful to use this third level to deal with conflicts, because most people do not want to look at the relationship level in a conflict. On the one hand most people are afraid of it and on the other hand it is usually not helpful at all because the cause lies in the foundation.

Nor does it make sense to repair a damaged roof if the cause has not been uncovered beforehand. In my experience, 99 percent of the cause of conflicts can be found at the system law level, i.e. in the foundation.

Direction of arrow from positive intention to negative effect: On the right side of the figure you will find an explanation of why system law violations occur without this having been or is intended. Many people, whether married couples or business partners, wonder why their previously good relationship has deteriorated. In the past they could solve their conflicts by themselves, but the relationship was still right.

It makes sense to assume that each person is doing the best for himself at all times. Thus it has itself in its acting or behavior, which often ̶ however not only ̶ on the Sachebene shows up ̶, a positive intention for itself.

If these positive intentions, whether for oneself or for the other, are not expressed, there are often negative effects on the systemic level. In most cases, the causer, the one with the positive intention, is not aware of this violation.

Positive intentions in action can have negative effects and often lead to hurt feelings at the system law level.

Example 1: In road traffic, someone crowds in.

Factual level – positive intention: The lead pusher makes the best of himself, because he has to make an appointment quickly and is already late. Normally, he does not intend that the driver he has jumped feels bad.

System law level – negative impact: The driver who has been pushed feels unrespected and as a result feels bad and angry. If the lead driver does not raise his hand as a sign of recognition, the relationship and material levels will deteriorate and the injured driver may step on the gas and push himself forward and hurt the first lead driver. This is how the loop of injuries begins, which can escalate further and further.

Solution: The pusher knows the possible emotional effect of the pusher, because someone has pushered himself into the pusher before. So he knows the basic feeling of bad feeling and anger.

Therefore the pusher immediately raises his hand with the right inner posture as a sign for: „It wasn’t my intention, I’m sorry if you feel bad. I take responsibility for this, i.e. I also take anger from you“. This usually dissolves the hurt feeling and anger and the situation de-escalates.

By doing so, he recognizes the system laws and also the injury, so that normally the injured feeling dissolves and the anger and situation de-escalates. This happens without the (previously) injured driver knowing the positive intention of the other, i.e. the reason why he jumped the queue. Here you can see that it is not necessary to know the positive intentions, but only that the system laws are recognized and the injuries are seen and resolved.

The declaration of positive intentions is more likely to be received as justification and is not helpful in resolving violations at the system law level.

Since the „Why did you do this?“ question cannot be asked in road traffic, no explanation or justification is sought for the behaviour. Therefore, such system law violations are only resolved by „raising the hand“ without justification.

Example 2: „I never wanted a man from the East who was in the Navy.“

Factual level – positive intention: The woman wanted to make it clear to him that he is still the chosen one and how strongly she loves him.

System law level – negative effect: At that time the man had not understood the positive intention of the woman and felt hurt. „Does she really want me? Why did she say such a thing?“ were his thoughts. He also did not have the courage to ask her these questions through his pink glasses, whereby the violation of the system law was not immediately clarified and continued to have an effect.

The other day they both drive together, where he didn’t talk to her for an hour. That was the first injury for the partner.

So began the loop of injuries, which escalated more and more.

Solution: The partner could tell the partner: „Your statement – none from the East and in the Navy – caused my stomach ache.“ The partner was shocked because she had meant well with her statement. She was able to acknowledge his suffering and thus his first injury was resolved.

Thereupon both could imagine that he had not been silent for an hour while driving, but had talked to her as in the days before. He could then acknowledge her hurt feelings, which he felt sorry for. 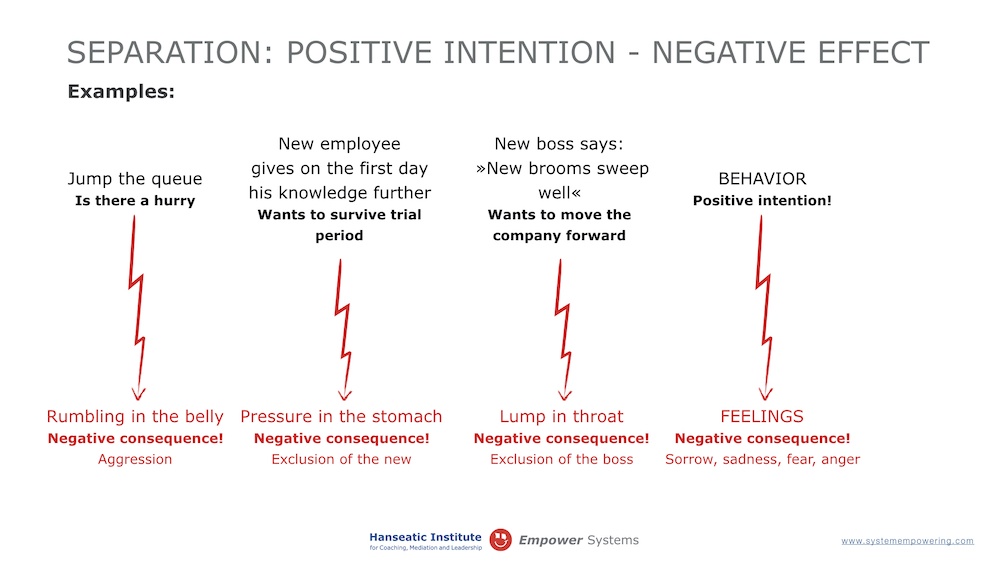 At this point, the recurring question of what is a positive intention and what is the difference between one’s own and that of the other is dealt with in more detail.

Further information on the Bischop communication model and systemic mediation can be found in my book: „Systemische Mediation“, Verlag Ludwig, Kiel, 2016.